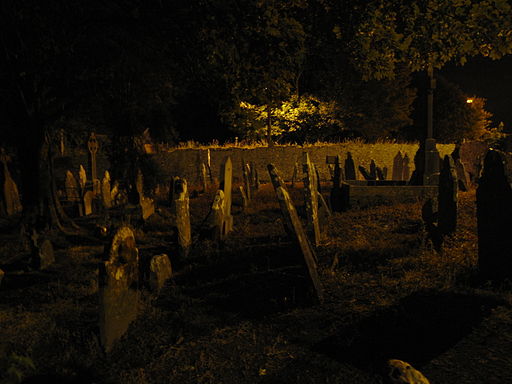 By Guliolopez (Own work) [CC BY-SA 3.0], via Wikimedia Commons

If you were to ask me to name the last place on earth I’d want to have sex, I wouldn’t have to think about it much. Although in a submarine and in a hot air balloon would be high up on my list, at the top would be just one place: a cemetery.

It’s not that I have an aversion to fucking on grass – in the backyard and at the park under a shady tree is divine, as is the middle of a football or baseball field late at night under the stars. But having sex in a graveyard, potentially on top of a corpse, just isn’t for me. I feel it’s sacrilegious for one thing – I wouldn’t want to find two people getting it on in front (or on top of) my parents’ graves. And I watch way too many movies to be comfortable with the idea.

When I think of sex in a graveyard, I always think of zombies, their bodies lying beneath the dirt in various states of decay, waiting for Hell to fill, or a priest to hang himself in the Dunwich, so they can walk the Earth.

Imagine: it’s late at night, and only the moon lights the tombstones. You lead me, unwillingly, down the shadowed path, with the only sound the rustle of the leaves as they’re caressed by a soft wind. The shadows are ominous, and you guide me to the grass in front of a grave marker…we kiss, and I give in: I take off my shirt and lie back on the grass. Your mouth kisses mine, then works its way down my body, your breath hot on my skin as I shiver in the moonlight. Your hands cup my ass through my jeans and squeeze as you work at the button on my pants with your teeth.

I have my eyes closed, and, lost in the feeling, as your hands caress my breasts I wonder how they can be in two places at once. Your fingers feel rough on my nipples, and I begin to notice an earthy smell, with something darker underneath. I sit up with a shriek, startling you. The hands hold my breasts tight, and the rotting fingers dig into my tender skin. Now I feel the bony ribs on my back and the dead breath on my neck; I hear the teeth chattering in a decomposing skull. You pull me free, and we run, praying the moon isn’t hidden by clouds.  It might have been better if it were, as we see the corpses rising from the ground, clawing their way from the grave, and the cemetery becomes filled with the cries of the dead….

Can we go to the football field now?