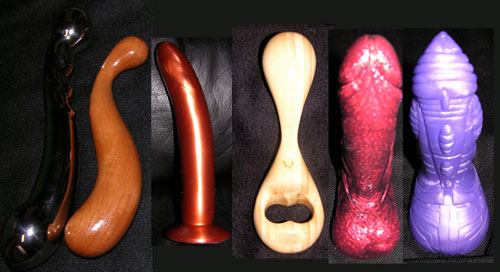 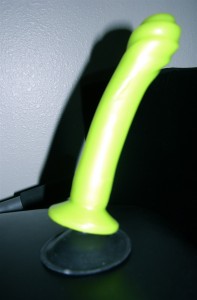 The Tantus Sherbet on the Tantus suction cup 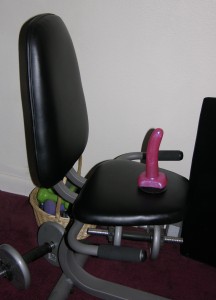 Smooth Operator on the stationary bike 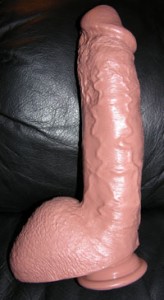 Posted in Kink of the Week, Tantus

Lately I’ve been fascinated with – nay drawn to – metal toys. I love the weight, the feel, everything about them. Originally all I had in metal were a variety of plugs. Although I’m now the satisfied owner of the njoy Eleven, when I first decided to expand my collection a little bit more I opted to pick up the njoy Pure Wand from EdenFantasys.

The Pure Wand comes in the signature njoy black box with a white outer wrapper. The box is hinged, and inside the Pure Wand rests on a bed of hot pink satin. A small booklet is included with information on the Pure Wand and other njoy toys. The box is ideal for storing this toy when it’s not in use. 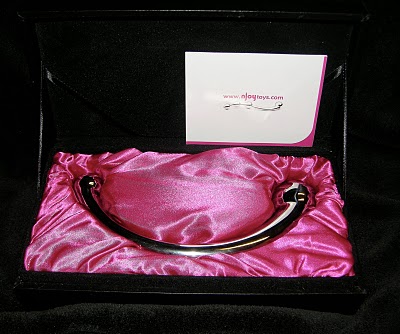 This is not a light toy. The Pure Wand weighs in at 24 ounces, which is heavier than a lot of other toys that I have. It’s smooth and seamless, and cold to the touch out of its box. The Pure Wand has a gentle curve which reminds me a bit of a bass clef in music. Measured along the curve, the Pure Wand is 10” long.

The Pure Wand is designed for g-spot and p-spot stimulation, and is double ended for your choice of size. The small end is topped by a 1” diameter ball and narrows below the ball to its minimum 1/2″ diameter in the shaft. The shaft gradually widens along the curve until it reaches the other end and meets the 1 1/2″ diameter ball. 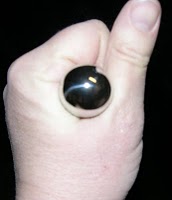 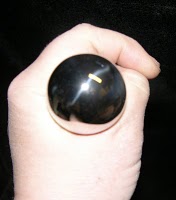 The Pure Wand works great for solo play. It’s not so heavy that it will tire your arms out easily, and the curve makes it easy to use. It works better for shallow thrusting and pressing on your g-spot. It also works well anally. You can use it with your partner as well, but you’ll want to be careful as the balls can hit uncomfortably inside if either of you thrust with this too fast.

This toy is made of medical grade stainless steel, so it’s very easy to care for. It can be washed with antibacterial soap and water, or cleaned with your favorite toy cleaner. You can also run it through the dishwasher on the top rack, boil it on the stove for 3 minutes, or wash it with a 10% bleach solution. It should be dried and polished with a soft cloth to keep it shiny and spot free. Any lubricant can be used, and just a little bit will do you.

This is a fun toy for temperature play. Running it under warm water heats it up nicely, and under cold water or for a short time in the refrigerator chills it down. It doesn’t take it too long to heat up to body temperature. 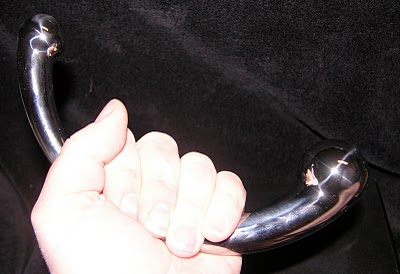 This item was purchased from EdenFantasys with no expectation of review. This review is in compliance with the FCC guidelines.

The Eleven comes beautifully packaged in a white triangular njoy box, which opens to reveal a black clutch leather purse with the njoy logo on the bottom of both sides. Inside below the handles it’s lined with hot pink fabric. This makes a great way to store this toy. Also included is a small product booklet with information on the Eleven and other njoy creations.

When I first went to pull the Eleven from its purse, I almost dropped it. This is one incredibly heavy toy! It weighs in at 2 3/4 pounds, which is quite a bit heavier than any other toy I have. By a lot. The weight isn’t evenly distributed – this one is heavier at its larger end, which is to be expected, and it’s satisfyingly full and substantial in hand.

My husband took one look and asked me what I was planning to do with it – kill burglars? I think he had visions Clockwork Orange running through his head. You probably could – this is heavy and solid enough that it would take someone out if you hit them upside the head. He also joked about using it for a dumbbell. It’s a bit too light for that, but in a pinch…

The Eleven is 11” long (hence its name), all shiny and beautifully shaped with two different sized ends. It’s entirely seamless and has the njoy logo on it’s side. It’s cold, smooth, and enticing, and wonderful for temperature play. It can be warmed under water or placed in the refrigerator to cool it down as desired. It’s even a bit chilly at room temperature, although it does warm up quickly to your internal temperature. 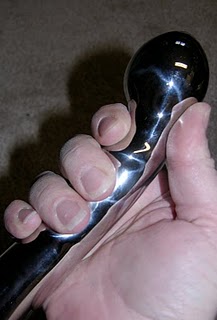 The smaller end of the Eleven is 1 3/4″ in diameter. The bulbous tip has a small point, and is about 2” long, and the bulb is gently curved for g-spot stimulation. It narrows a bit to 1 1/4″ for the shaft, which on this side has 3 distinct finger ridges. The ridges are on the g-spot side for gentle internal stimulation, and you can rest your fingers comfortably in them. 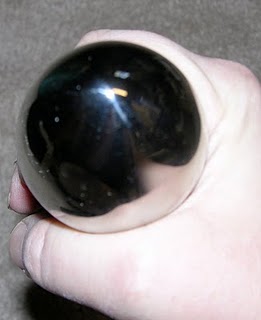 The larger end is a full 2” in diameter, with the bulb being about 2” long. The neck on this side is wider, starting at about 1 3/4″ and narrowing down to 1 1/2″ where it meets the ridges from the other end. This side also has a gentle curve to target your g-spot.

You’ll want to be careful not to thrust too hard or fast with either end, at least until you’ve warmed up a bit, as the ball can catch on your bone inside and it will hurt.

Since it’s made of surgical grade stainless steel, the Eleven is easy to care for. It’s nonporous, phthalates-free, latex-free and hypoallergenic, and can be cleaned with water and antibacterial soap or your favorite toy cleaner. You can also run this through the dishwasher on the top rack – it won’t stain or spot.  It can also be boiled on the stove or washed with a 10% bleach solution. Once washed, the Eleven should be dried and polished with a soft cloth. All lubricants are safe to use with this toy, and you won’t need much to have it slick and ready to insert.

So, Does It Work? Emphatically yes! I was a bit worried of letting my husband use this on me, as he tends to get very enthusiastic as we get going. I told him to start with the smaller end first and it slipped comfortably in with minimal lubricant. Turned the right way, with the curve facing my front, it felt absolutely incredible! He used shallow thrusts and I could feel the ball hitting on my g-spot.

My husband did have to switch arms frequently while using this on me, and he said it was quite an exercise for his arms. Hopefully with more use they’ll get stronger too. I’m glad he did switch arms fairly regularly, since I wouldn’t want him to have one arm like Popeye and the other like Shaggy from Scooby Doo!

I had thought to use this in the Liberator Wing, but it’s just a bit too short to make this usable in the pocket as a hands-free toy.

I really like the heaviness of the Eleven. While I didn’t notice much at the time, I was a bit sore after use. I would recommend starting out slowly and shallowly at first to give your body time to adjust – if you’re not ready the ball could catch and dash orgasm hopes.

While expensive, this has been worth every penny to me. It’s utterly fantastic!

I got mine at EdenFantasys, and you can buy one for yourself by clicking the Widget below.

This product was purchased from EdenFantasys with no expectation of review. This review is in compliance with the FTC guidelines. 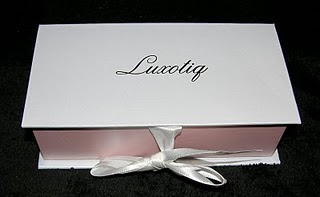 This plug comes packaged in a pretty white and pink box with Luxotiq written on the top in script. The box is nice enough to be given as a gift. Untie the pale pink ribbon and lift the lid, and the plug is nestled inside on a bed of white satin over foam. Included in the box are a soft pink cloth for drying the plug and a small card with information on care. 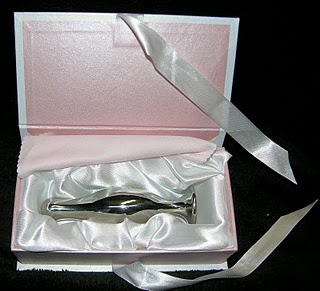 The plug is made from surgical grade stainless steel, which is non-porous, phthalates free, latex free, and hypoallergenic. It has no smell or taste, and is very easy to clean. It can be washed with soap and water, and dried with a soft cloth. Abrasive cleaners should never be used as they will scratch the finish. It can be disinfected by boiling or running it through the dishwasher on the top rack, and shouldn’t water spot. Water-based, oil, and silicone lubricants are all safe to use.

I haven’t found after cleaning that it retains any kind of scent from use. It can be stored safely in the box it comes in, or another type of padded bag can be used. 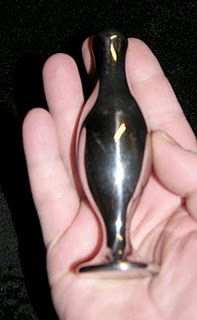 The Luxotiq plug is probably the heaviest plug I own, even heavier than my Njoys. It has a beautiful design with rounded edges and curves that beg to be enfolded by your body. It could probably be set out with no one being the wiser as to what it was.

It’s not as large as it looks in the pictures, and is smaller than a pop can. It is 4 3/4″ long, with an insertable length of 4 1/2″. It is 1 3/8” wide at its maximum diameter. The head is easy to insert with a liberal lube application. The larger bulb may take a bit of warm-up.

The neck narrows down to 1/2” before flaring into the base. I had no trouble with this staying in place, or coming out when I didn’t want it to. It can be worn out, but because of both the plug and base shape, I didn’t find this as comfortable to wear out and about as other plugs. It was fine for wearing around the house and during sex, however, and I never forgot it was there.

This is truly a beautiful and functional plug. It’s a joy to look at and a pleasure to use.

If you like a firm, heavier plug that isn’t too large, this is one to look at. I purchased mine at EdenFantasys, and you can too by clicking here.

This product was purchased. This review is in compliance with the FTC guidelines.