Fun Factory has always been known for its uniquely shaped and brightly colored toys. While some have been realistic in shape, they’ve never come in anything remotely resembling a flesh color.  I had the G4 Big Boss in a nice matte black, but when I saw the Boss III (also called the Nude Boss or Boss Naked), I knew I had to get it to review from Babeland.com .

END_OF_DOCUMENT_TOKEN_TO_BE_REPLACED

I had never really considered warming/cooling clitoral gels until fairly recently, and I will say I’ve found them, for the most part, to be a lot of fun.  The cooling ones have been more successful for me, but I’d been hoping to find a warm one that wowed me. So when Babeland offered ON Arousal Gel for review, I was happy to give it a try. END_OF_DOCUMENT_TOKEN_TO_BE_REPLACED 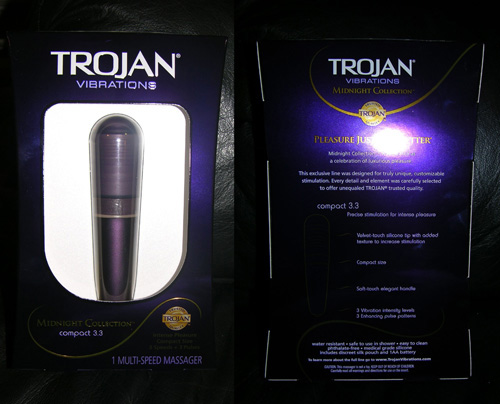 END_OF_DOCUMENT_TOKEN_TO_BE_REPLACED

There’s Not A Whole Lotta Buzzin’ Goin’ On

I like cute toys, but regardless of how they look, they’ve got to work. I have a few that are pretty ugly – they’d be the wallflowers at the dance – but they work wonderfully well and I wouldn’t trade them for anything.  Some of the best looking ones I have also work as well as they look, and they’ve definitely been keepers. But we all know there are those toys that look great and…don’t work. I’ve had my share of them, and they’ve been failures for one reason or another. Which brings me to Picobong. The toys are all so cute, and I had high hopes that their form would match their function, so I chose the Picobong Kiki and Picobong Mahana for review from Babeland.com . Babeland isn’t carrying the Mahana anymore, so this review will focus on Kiki. 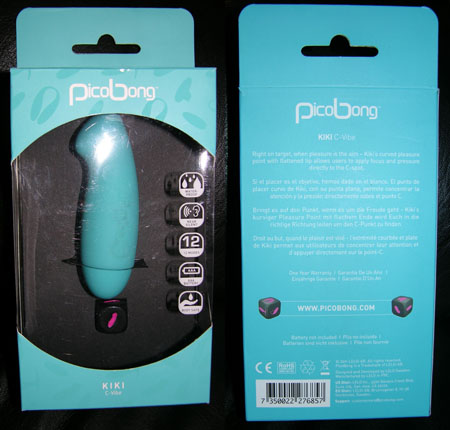 END_OF_DOCUMENT_TOKEN_TO_BE_REPLACED

Ever since I got my first vibrating remote control egg, my husband and I have had a blast using them in public. We almost always use insertable eggs, but there are times when I want more stimulation (and he wants to see me more excited). I was happy to see the Babeland Vibrating Pleasure Panties up for review from Babeland.com, and knew I had to try these out. 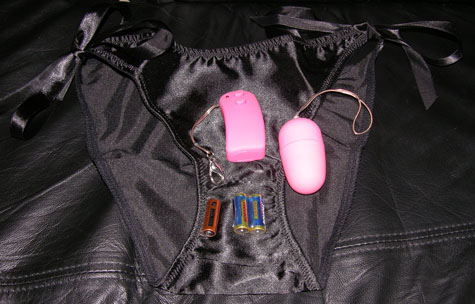 The Vibrating Pleasure Panties come in a black satiny bag with a black ribbon double drawstring. A small pink and white tag with product information is attached. Inside the bag are the panties, bullet, remote, and batteries. The bag makes it easy to store everything needed together. 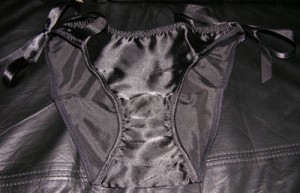 The panties are about 12” across the back and 12 1/2″ across the front (no elastic), with 14” ties on each side. The ties make the panties adjustable and they will fit a wide range of hips, from as small as about 25” to as large as about 50” or so. They aren’t really adjustable when on, though, as it’s too hard to get the sides even. The easiest thing to do is tie both sides evenly, then slip the panties on, and remove and adjust as necessary. They feel like polyester and are machine washable. 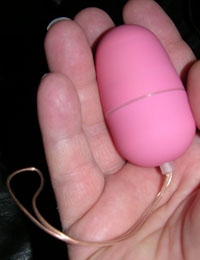 The bullet that’s included is quite large. It’s made of pink ABS plastic with Rubber Cote, and it’s controlled by a remote. The bullet is about 2 3/8” long and 1 1/4″ in diameter. It fits into the panty pocket, but it’s bulky and too large to really have over your clit if you plan to wear pants and don’t want an obvious bulge. It works under a skirt, but you may have to position the panties so that the bullet is nestled in your labia for best contact and the bullet may not stay in place. 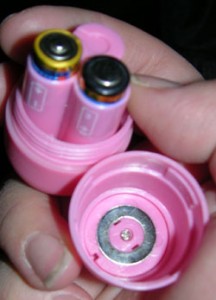 The bullet uses 2 N batteries (4 of which are included, and 2 are already in the bullet), They’re easy to insert by unscrewing the bullet halves. An O-ring sits below the threads on the bullet, and it can be a bit problematic to reattach the halves as the ring wants to get in the way. If the bullet won’t turn on and you’re sure the batteries are in the correct positions, you might want to remove it – without it the halves go smoothly together and the batteries have no problems touching the contacts. 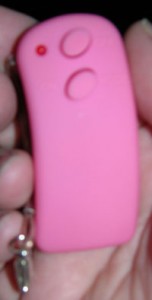 The bullet is controlled by a small remote. The remote takes a 12v battery (2 of which are included). It has a small LED light on the front and 2 buttons – the top button is a quick off button, while the bottom button turns the bullet on and cycles through the modes:

After the last pattern, the bullet shuts off rather than cycling through the modes again. The vibrations are fairly buzzy and moderately strong on the highest setting.

The LED light on the remote flashes when it’s turned on, and it also flashes when you change modes. This remote has a range of 16 feet, but it may work at a considerably lesser distance depending on how much interference and objects or people are between its wielder and the bullet.  The bullet isn’t too loud when it’s in place, although it will easily be heard if the room is quiet. In a bar or a location with background noise it won’t be noticed. 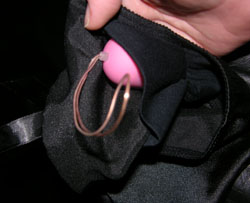 So, Did It Work? Yes and no. I really like the idea of these panties, and the fact that they’re adjustable. Some elastic at the top of the front and back pieces would make them easier to fit, though I was able to adjust them satisfactorily and they stayed up find when I tied them so they fit above my hips.

My biggest problem was with the bullet. I like the variety of patterns and the strength of the bullet (I don’t want anything too strong if I’ve got to control myself in public), but it’s too large for me to wear comfortably in the pocket. If it were flat, or smaller in diameter, it would have fit much better in the panties for me to use for clitoral stimulation. I would have liked to wear this with pants, but it seemed to make too noticeable of a bulge and wasn’t discreet. It did work internally and fit much better that way. The only way I could wear this out in the panties was under a skirt, and then it didn’t seem to make as tight of contact as I would have preferred, even with nylons on.

The remote was a bit flaky – sometimes it would work from about 15 or so feet away, and other times my partner had to be just a few feet away to be able to change the patterns – this happened more frequently when we were out at the bar and there were lots of people around.

The bullet wasn’t too loud in a bar setting – it was completely unnoticeable. It wouldn’t have worked nearly as well in a quiet setting. It’s not terribly loud, but loud enough to be heard if there isn’t enough background noise.