Lately I’ve had a thing for rabbits. Not the soft, furry, living and breathing kind, mind you, but the silicone/plastic/other material vibrating and rotating at the push of a button kind. I’m finding them rather fun for solo play, so I was thrilled to receive the Lia Dual Stimulator Tickle Tip, one of three new rabbit designs by Cal Exotics,from Vibrator.com to review. 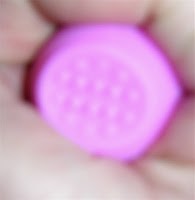 The clitoral piece is about 2” long and has 2 “tongues” on the top. These tongues make the stimulator bird-like in appearance, and they vibrate like crazy when the Lia is turned on. The entire stimulator is flexible.

A silver band separates the upper part of the Lia from the base. This base twists about 1/4 of a turn to open so you can insert 2 AA batteries, + side down. There is also an O-ring to make the Lia safe for fun in the shower or bath. 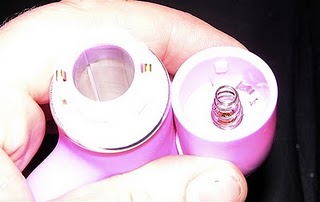 Unlike many rabbit vibrators, the shaft of the Lia doesn’t rotate. Instead it has two motors for vibrations concentrated in the head and clitoral piece (the shaft doesn’t vibrate hardly at all). The motors aren’t independently controlled: instead they are controlled by the same button. The Lia is fairly quiet, which makes it good for discreet use.

The Lia is made of silicone, so it is phthalates free and non-porous. It has no smell or taste. It’s easy to care for – simply wash before and after use with warm water and antibacterial soap (a toy cleaner also works). The Lia should be dried after washing and can be stored in its box or a toy bag. Only water-based lubricants should be used.

I tried the Lia in the bathtub and had no problems with water getting into the battery compartment.

Thank you to Vibrator.com for sending this to me for free to review!

This product was provided for free by Vibrator.com in exchange for an unbiased review. This review is in compliance with the FTC guidelines.

This entry was posted in Reviews, Vibrator.com. Bookmark the permalink.

2 responses to “Tickle Your Fancy”