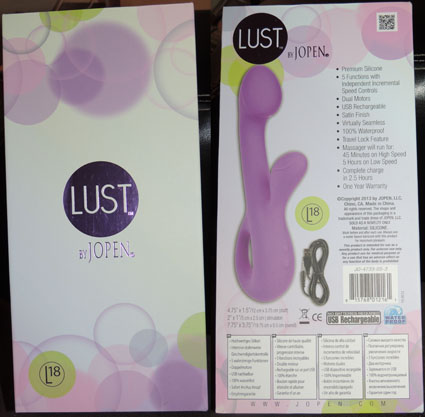 The L18 is part of Jopen’s Lust line, and comes in a white box with colorful circle accents. The product is pictured on the back, along with care and use information. The box has a flip-open lid with a magnetic closure, and is great for storing the toy. Inside the box is the L18 in either pink or purple (mine arrived in pink), a USB charging cord, and a small instruction booklet detailing use and care. It also has a one year warranty. 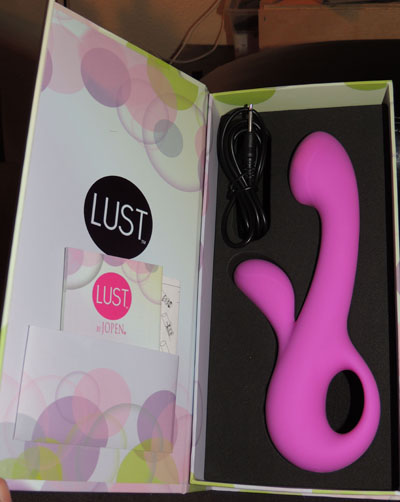 My Jopen L18 bubble-gum pink. It’s made of silicone with a satin finish, so it’s relatively slick and doesn’t have a lot of drag, but it does have a bit of give when you press the surface. Just a bit of lube (water-based is recommend – if you prefer silicone, do a spot test on the bottom of the base first) makes it slick and easy to insert. The L18 is waterproof, so you can play in the tub as well as in bed. 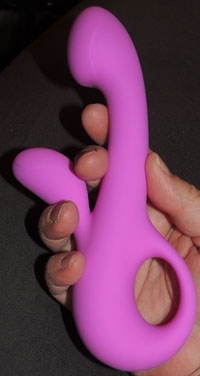 The clitoral stimulator is 2” long and 1” in diameter. It’s firm, like the head, but flexes out easily from where it joins the base, allowing it to be easily positioned. Both the head and the clitoral arm have a motor. The motors are controlled together.

The L18 also features a loop on the back side of the base. The loop has a 1 1/2″ opening (about 3/4″ wide), that is ideal for inserting 1-2 fingers for better control when thrusting.

The L18 is controlled by two buttons located on the front of the base. Pressing both buttons together for 4 seconds will lock or unlock the toy for use, making this easy to travel with. The top button turns the L18 on and off, and will also decrease the intensity of the motors when it’s pressed and held. The bottom button changes the vibration pattern when pressed, and when pressed and held increases the strength of the motors’ vibrations. The L18 can cycle through 5 vibration patterns (1 steady and 4 pulse patterns), and each pattern can run at the varying intensities. Red light shines behind the buttons when the L18 is in use. The vibrations are quiet, and won’t be heard over any background noise. 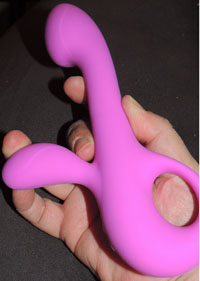 So, Did It Work? I really like the L18. I sometimes have trouble with rabbits, as so many have clit arms that are not as long as I’d like. The L18’s is long enough to hit my clit dead-on, and it’s also flexible so that I can get the right angle. The motor in the arm is strong – which for clitoral stimulation is a must for me – and it’s strong enough to get me to orgasm.

Although the shaft isn’t thick, the head is thick and hits my G-spot. The motor in the head is also strong, and the head is firm enough to get G-spot pressure.

The 45 minutes of use time might not sound like a lot, but I’ve found that if I’m using this completely on high that it will easily get me through 2 separate sessions before having to recharge.

The only thing that might make the L18 better, for me, would be to have separately controlled motors, so I could have steady vibrations on my clit and a pattern inside.