I like reading mysteries, adventure, and of course erotica, and I’m always on the search for something new. I enjoyed reading both The Slave Factory and The Slave Factory: Exposed! by I. M. Telling last year, so I was excited to learn that he had released a third book – The Slave Factory: Total Power Exchange – in the series.  The author provided me a copy of this book for free in exchange for this review. 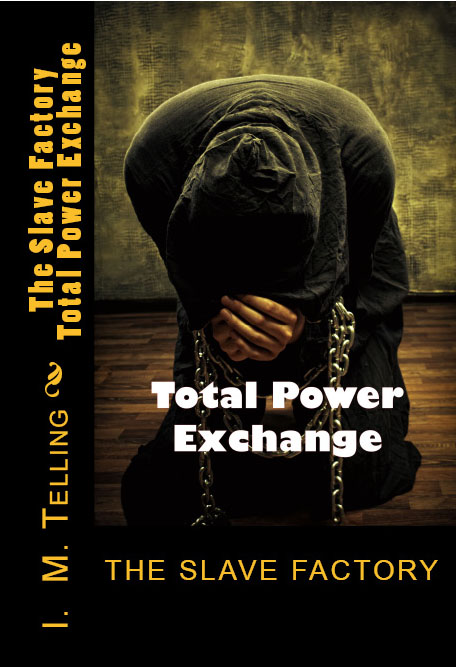 The Slave Factory: Total Power Exchange is the third book in the Slave Factory Trilogy by I. M. Telling, and was published in December 2013. It’s 362 pages, and is available in several formats, including paperback, Kindle, and pdf versions.

Please note: some spoilers can be found below.

The Slave Factory introduced a group of strangers: Tonya, Jim and Sheila, Anne, Bruce, and Jerome, who became more than friends when they underwent training at the Academy to become contracted slaves in exchange for a large amount of money, finally becoming auctioned to the highest bidder before the Headmaster claimed the most submissive as his own.  The Slave Factory: Exposed! continued the story, with Tonya kidnaped by the sadistic Mr. Green and the Academy raided by the FBI, and Fitzpatrick stepped up to control the situation and again become a part of Per il Placere del Maestro.

The Slave Factory: Total Power Exchange begins 3 years after book two ends, and the story takes place both in the United States and Italy.  Fitzpatrick McMullen and his wife, former slave Tonya, live in Florida. Now that Fitzpatrick is part of the Council of Per il piacere del Maestro, he prepares to fly to Rome to meet with the Supreme Grand Master, leaving Tonya to take care of herself while he’s away. He’s going on a journey of submission, with hopes of bringing changes to the organization spurred on by the death of one he called a friend, but Fitzpatrick doesn’t know that this trip will place him at odds with Bishop, the heir apparent to the Supreme Grand Master.

During his meeting with the leader of Per il piacere del Maestro, Fitzpatrick is confronted with his ideas of changing the company as well as decisions he’s had to make since he came back to the organization.  When he leaves, he learns of Lord Bishop’s desire to have him kidnaped and disposed of by Thomas, who has been doing Bishop’s dirty work. He puts his trust in Thomas, and is taken into Bishop’s clutches, with no one except Lord Bishop, Thomas, and Wanda aware of where he’s being held.

Fitzpatrick’s friends gather to help rescue him from impending death: Tonya, Bruce, with his new playmates Bonnie and Billy, Head Mistress Katherine and Mistress Sheila, Jim (Shiela’s estranged husband), Wanda and Thomas, and some unexpected help from the FBI.

Tonya’s plan to save her beloved is risky, and when the group journeys to Rome, she takes Bishop as her master to help free Fitzpatrick before it’s too late. But can this group of friends rescue him in time, or will Tonya and Fitzpatrick be separated forever by the conniving Bishop?

Like the second book in the trilogy, The Slave Factory: Total Power Exchange focuses much more on the adventure taking place rather than sex, but the sex scenes that are included, particularly with Tonya, are riveting and arousing. We also find out some of what’s been going on with the other major players in the story. Although the first book in the series is my favorite, this is a good read, and I’d recommend it.

Thank you to I. M. Telling for sending me a copy of The Slave Factory: Total Power Exchange for free to review! If you’d like to read the third and final book in this series, or read them all, you can pick up a copy on Amazon.

This book was provided to me for free in exchange for an unbiased review. This review is in compliance with the FTC guidelines.