I Wand You To Wand Me

The Embrace Body Wand comes in a slipcovered black box. The outer cover has product information on the sides and back, as well as a picture of the wand in the color chosen (pink or grey) on the back. The box itself is sturdy, patterned black cardboard, and ideal to use for storage. Inside, the Body Wand and the USB charging cable rest in a foam bed, and a small instruction paper is included. 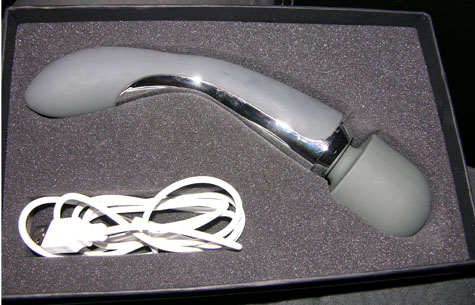 This silicone wand is almost 9” long overall, with two distinct ends. The rounded end is about 2 1/4″ wide and 1 3/4″ long, and is attached to a smaller, somewhat flexible neck. This neck is short, but it allows some movement of the head when pressing it against the clit. There’s a visible seam that runs up and over the head, but it isn’t noticeable during use. The other end, which would typically be the handle, is firm, with a gently tapered tip.

On the body of this toy are two buttons on a silicone panel. These are surrounded by a silver plated ABS plastic area. The buttons control the motors in the wand. The Body Wand has two motors, one in each end, so you can use the end you prefer for stimulation. Both ends can be turned on at the same time, or independently of each other.

The wand comes partially charged, but should be fully charged before your first use. A full charge takes about 2 hours, and it will run about 90 minutes on a charge. The plug is long and narrow, and inserts into a small, silicone-covered hole below the buttons on the handle. Once it’s pressed firmly into the hole and plugged into your computer or a USB plug adapter, the wand’s buttons will flash with a white glow behind them to indicate the wand is charging. The lights will glow steady when fully charged.

To turn on the desired end, simply push the button closest to that end. The Body Wand will cycle through 7 functions: low, medium, and high vibration, followed by  pulses and patterns. The vibrations are equally strong in each end, and are fairly quiet.  To turn the Body Wand off, press and hold the corresponding button for about 3 seconds.

Being waterproof, the Body Wand can be used in the shower or tub if desired. It should be washed before and after use with soap and water, a toy cleaner, or wipes. The silicone is slick, so it can be dried off with a towel without leaving fuzz behind. It can be stored in its box, or in  a toybag if desired. Water-based lubes are recommended if necessary; if you choose to use silicone lube, do a small spot test on the underside of the handle to make sure the lube is compatible. 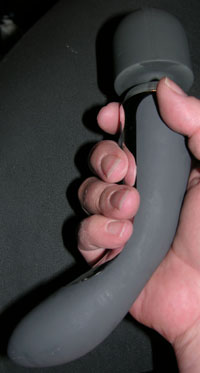 Being waterproof is also great – this wand has found its way into the tub with me on several occasions since I first received it. The charging time is reasonable, and it holds its power long enough for 1 to 2 sessions.

The only tricky thing with the Body Wand, for me, was the buttons. It’s intuitive enough that the button closer to the end in use is the one to press, but I found myself sometimes pressing the wrong one when I wanted to change the patterns, and other times, when I’d be pressing this into my clit, I’d hit one or the other button by mistake.

Thank you to Cal Exotics for sending me the Embrace Body Wand for free to review as part of their Sexpert program! If you’re interested in this rechargeable, silicone, dual-sided wand, you can pick one up at SheVibe by clicking the widget below.  Don’t forget to check out Club CalExotics on the web as well!