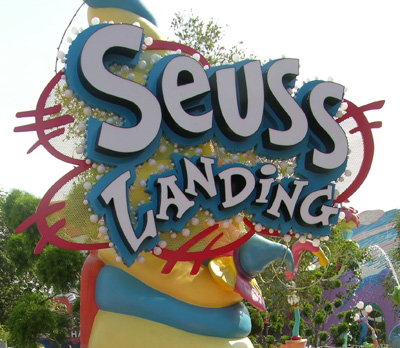 taken at Universal Studios, by myself

I wrote this post several years ago – it was posted on another website that’s now basically defunct, and it was published non-exclusively, so I’ve decided to repost it here. I hope you enjoy it!

With two small children, I read a lot of books. Some of them multiple times. Particular favorites in our house include all of Dr. Seuss. He’s great fun to read, but by now I think I have all of his stories and tongue-twisters memorized. I find myself doing rhymes during the day when I’m talking to my family or friends. It’s scary how they come to me without even thinking. And sometimes I dream in Seuss. It can even pop into my head when I’m having sex.

With Dr. Seuss’s birthday coming up (it’s today!), I wonder what it would be like if Dr. Seuss wrote about sex. There’s such a variety of stories that he could write! With his silly rhymes and wonderful drawings, imagine the places he’d go!

In Dr. Seuss’s Alphabet book you might find the following:

Big B. Little b. What begins with b?
Bertha’s bouncing boobies…b,b,b.
…
Big V. Little v. What begins with v?
Vera’s Vintage Vibrators…v, v, v.
…
and so on. This could be an amusing book. Imagine the illustrations!

One Fish, Two Fish was always popular. But it could have gone something like

This one has a little scar
This one’s pointing near and far
Say! What a lot of cocks there are!

Some are black and some are white
Some are heavy, some are light.

This cock’s thin, and this cock’s fat.
The fat one has a yellow hat.

Why is no cock like another?
I do not know, go ask your mother.

A book my children loved when they were little was Hop on Pop, This was a great book to help them learn to read by changing the first letter of rhyming words. I imagine some of it might go:

Head
Head
He likes to get head.

Head
Bed
He gets head in bed.

The simple books work well for sex. Instead of Left Foot, Right Foot, we might find:

Be they large or be they wee,
How many, many boobs you see.

Even the books Dr. Seuss wrote for older kids can be perverted. One of my favorite books is Fox in Socks, which has some incredible tongue twisters. Imagine the fun that could be had:

Another of my favorites is Green Eggs and Ham. The title wouldn’t quite apply, but imagine the rhymes here!

“Just swallow once. I know indeed
You’ll love it when you drink my seed.

“Your aim’s so bad I will not try.
You’ll likely shoot it in my eye!

I will not swallow on a plane.
Not in the dark. Not on a train.

Not in the sea, not in the air.
Your balls can turn blue, but I really don’t care.

I will not swallow on the bed.
I will not when I give you head.

Another popular story at our house is The Sneeches. Dr. Seuss could have had some fun with this one! Imagine:

Now the Natural Snatches
Had snatches with hairs.
The Smooth-shaven Snatches had none upon theirs.

The hair was so fine, and really so small,
You might think such a thing wouldn’t matter at all.

But since they were bare, all the Smooth-shaven Snatches
Would brag “We’re the best looking with all the best matches.”

With noses in the air, they would sniff and they’d snort
“Fluffing! That’s a job for you Natural sort!

Lastly, here’s a little perving of the classic The Grinch Who Stole Christmas. While the live action version certainly perverted this story, I imagine Dr. Seuss could have done so even better:

This entry was posted in Uncategorized and tagged Sex. Bookmark the permalink.