Spread Some Holiday Vibrations and Cuteness With Santa Duckie! 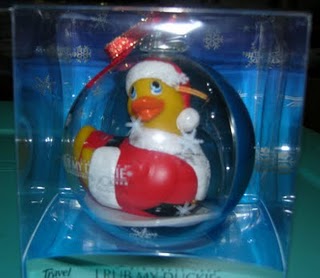 From Big Teaze Toys, the Santa Duckie is another in their line of  I Rub My Duckie toys.  With his innocent face, red Santa hat accented in white, to his Santa outfit with white trim and black belt, Santa Duckie is travel sized and oh, so adorable!
Santa Duckie comes in a plastic cubed box, about 4 3/4″ on a side.   He is displayed inside a Christmas ornament inside the box.  The box is easy to open, and once you pull Santa Duckie out, the bottom of the box can be removed for instructions in 7 languages and battery insertion information. 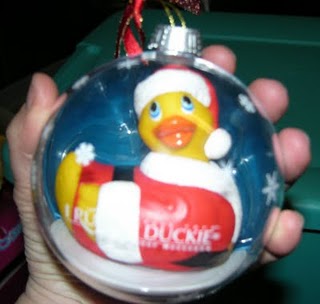 The ornament comes ready to hang on the tree to surprise that special someone on Christmas morning.  This is clever Christmas packaging!
Santa Duckie can be removed from the ornament by untaping the ornament sides, and then unscrewing the cap on the top.  Once Santa Duckie is out of the ornament, the strings holding him to his plastic resting base must be cut so he’s free. 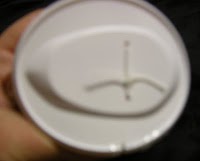 I was surprised at how hard Santa Duckie was.  Having never had an “I Rub My” anything, I was expecting him to be soft and squishy like his regular non-sextoy bathtub counterparts.  But Santa Duckie is hard and firm all over.  The better to rub you with, my dear!
Santa Duckie fits nicely in the palm of your hand.  He’s about 3 1/4″ long, and about 3” high.  He has a very, very light smell, and no taste right out of the box. 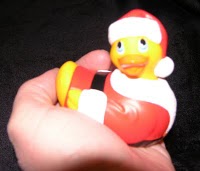 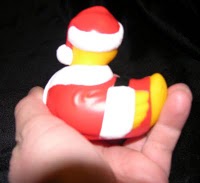 His battery compartment is on the bottom.  The compartment can be most easily accessed by using a dime to turn the lid, although it can also be opened with a file or your fingernail.   One AAA battery goes in negative side first, and then the lid can be reattached.  Make sure you have the lid on and closed before taking Santa Duckie in the water! 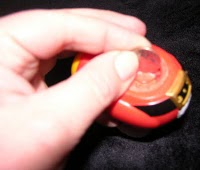 Above the battery compartment is another dial, which turns Santa Duckie on.  He only has one speed, but it’s pretty strong, and the vibrations fairly powerful.  The vibrations can be felt all over Santa Duckie, from the top of his head to the tip of his tail, and even on his belly.
While not overly noisy when on (about as loud as a vibrating cell phone), Santa Duckie becomes extremely loud if he’s held at angles due to how the battery fits in the compartment.  I tried him with a few different brands of batteries, and some brands were just a little larger and fit better in the compartment.  This made him much quieter than the slightly smaller batteries, which seemed to vibrate against the compartment walls quite loudly.  He’s a little louder in the water, but nothing that can’t be drowned out by some background music.
Santa Duckie is waterproof (I’d expect so!), and comes with a 90 day warranty.  He’s made of PVC, and is non-toxic, latex free, and phthalates free.  If necessary, water-based lubricants can be used to make him slip and slide.
Santa Duckie would be a great gift for that special someone this Christmas.  Or even for yourself.
Thank you to Babeland.com for providing me this toy free to review!

This product was provided to me free of charge by Babeland in exchange for an unbiased review. This review is in compliance with the FTC guidelines.

This entry was posted in Babeland, Reviews and tagged Christmas, Sex Toys. Bookmark the permalink.

4 responses to “Spread Some Holiday Vibrations and Cuteness With Santa Duckie!”