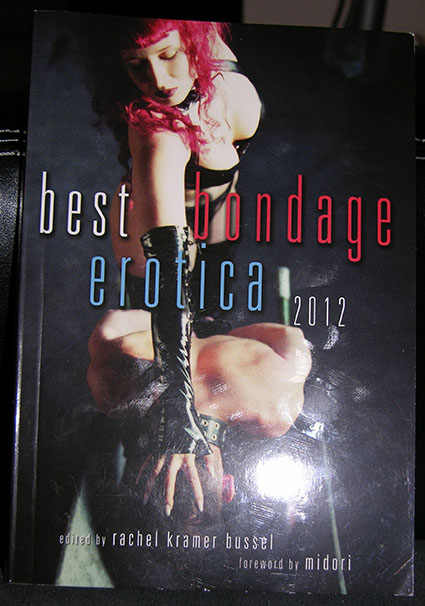 This review was written by me, and was previously published on another website with non-exclusive rights.

In this collection of stories, Rachel Kramer Bussel has pulled together a variety of couplings, situations, and means of bondage, some of them quite unusual, and many of them hot. The stories may get you excited just reading them, and several of them may give you an ideas for new situations you’d like to try. Ice, anyone?

The book is edited by Rachel Kramer Bussel, and the Forward is by Midori. Short blurbs about each editor, and also Rachel, are included at the end.

In her forward, Midori talks about how bondage is a fantasy for a lot of people – probably more people than you realize – and how the lust for bondage stirs passion and desire. She asks the reader if they’ve given in to their bondage desires, and then suggests they place themselves in the characters’ situations and see what risks they’d be willing to take on, and what desires they’d fulfill, as they satisfy their hidden appetites.

On to the introduction, where Rachel introduces the topic of the book and notes that the majority of stories submitted for this collection involved women as the dominants and men as the submissives. Not all of the stories have this theme, but it’s strongly represented. She gives a brief introduction to several of the stories before turning the book over to the reader.

In the stories in this book, the characters have given in to their desires, some in quite unusual and daring ways. Most of the stories involve heterosexual couples, and they vary as to the dominant partner, although more feature the woman on top. There are a few same sex pairings and exploration, threesomes, voyeurism, and even some daring self-bondage. The bondage has a lot of variety as well: handcuffs, opera gloves, spanking, gags, rope play, corsets, and heavy teasing, just to name a few.

As with any collection, there were a few stories I didn’t care for, but I liked a lot of the stories in this book. The three that I enjoyed the most:

“The Spider and the Fly” by Salome Wilde Nick has a thing for Paolina, from the way she ties him to how she uses her strap-on. He’s a bit shy and private, though, and isn’t willing to join her in a club performance. At least, that’s what he thinks as he heads to the club to watch the show. But will he change his mind and play the fly to her spider?

“The Cupboard Under the Stairs” by Kay Jaybee With her husband home, the turning of the key to open the cupboard excites Kristi with the pain and pleasure it promises. But this time, Mark blindfolds her and puts headphones over her ears. Will the absence of her senses lead Kristi to new heights of pleasure, and how long will it take to discover the other surprise Mark has for her?

All in all, the stories in these pages are hot, and even if you’re not into the play described, it may make you curious to discover a bit more about it…and in the process discover a bit more about yourself and your desires. And you also may wonder when you’re done: just how long would it take for an ice cube to melt if you…? Is that cupboard under the stairs feasible to make in your house…?

While Best Bondage Erotica 2012 is no longer available, you can pick up some other good reads at Good Vibrations.

This entry was posted in Good Vibrations, Reviews and tagged Bondage, Books. Bookmark the permalink.

One response to “By Your Command”