Don’t You Wanna Ride It?

The world didn’t end a few days ago, as many had feared.  It makes you wonder how many people truly thought the end was here! I think the people who had a party had the right idea. It’s certainly the end of the year at least, and as December winds down, Christmas celebrations and excitement loom, we’re all still alive, and 2013 will dawn brightly, it’s time for my December review for Cal Exotics! This month, as part of their Sexpert program, I received the Waterproof Power Stud Curvy to review. 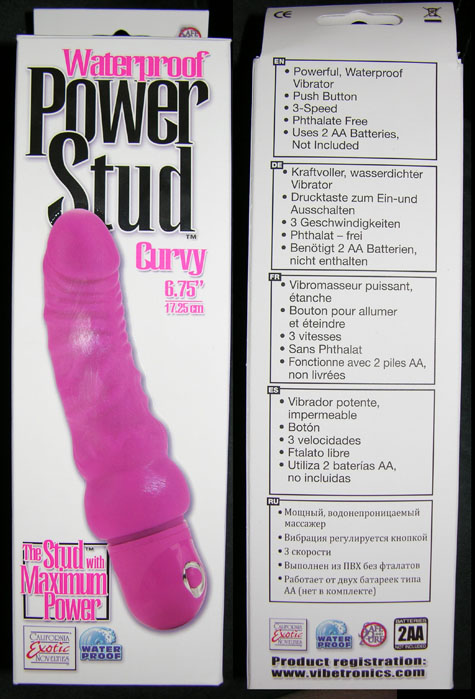 The Power Stud Curvy comes in a white box, with the product picture on the front and information on the sides and back. Inside the box, the Curvy is wrapped in plastic.

Curvy comes in three colors: pink, purple, and black. I received the pink one to review, and it’s a nice, deep shade.  It’s made of phthalates-free PVC (the shaft), ABS plastic with and without PU cote (the base), and ABS plastic with silver plating (the décor). Even though the material is PVC, it has no scent whatsoever right out of the box.  Curvy is smooth and soft to the touch, with very little drag.

The head is a nice 1 1/2″ in diameter, and it’s curved for g-spot stimulation. The tip can be pressed in, but it isn’t super flexible and is fairly firm to the touch. The shaft, which widens out to 1 3/4″, can also be pressed in or squished, except for the area right below the head. This appears to be where the motor of the toy is located, and the material doesn’t give here at all. 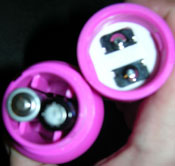 Curvy’s base is plastic, in a matching pink to the shaft.  The battery compartment is accessed by twisting the base about 1/4 of a turn. The 2 AA batteries are easy to insert, and the cap is easily sealed. An O-ring sits below the thread, making Curvy waterproof and safe to use in the shower or tub as long as the cap is securely tightened (it also makes it easier to clean).

The vibrations are pretty strong and buzzy, and are concentrated in the tip. They’re fairly quiet when Curvy is inserted, and a TV or the covers will effectively mask the sound,but it’s quite loud if it’s being used for clitoral teasing.  Externally, you’ll want the volume up a bit louder or no one around if you’re worried about anyone hearing.

Being waterproof, Curvy’s easy to clean. It should be washed both before and after use with antibacterial soap and water, and attention should be paid to the shaft and below the head to make sure the surface is thoroughly clean. It can be dried with a soft cloth and stored in the box or in a toy bag. It’s best to remove the batteries when storing to increase their lifespan.  The use of waterbased lube is recommended.

So, Did It Work? I liked the Curvy more than I expected. The size is nice, and I like the detail on the head and shaft – I can feel the texture when I use it. The head isn’t too squishy, so it stimulates my g-spot, and the vibrations are strong internally. The head’s not bad when I use it clitorally either, although the vibrations aren’t strong enough for me to use this much that way. I also liked that, even though this is made of PVC, it has no scent at all, which is so often a downside of PVC toys.

Thank you to Cal Exotics for sending me the Power Stud Curvy to review this month as part of their Sexpert program! If you’re interested in the Curvy, you can pick one up at EdenFantasys by clicking the banner below. And don’t forget to check out Club Cal Exotics as well!

This entry was posted in Cal Exotics, EdenFantasys, Reviews. Bookmark the permalink.