He Ain’t Heavy…Nor’s His Brother

Kegel balls help to tone and strengthen a woman’s pelvic floor muscles, and while you can certainly do kegels without a toy of any kind, the balls serve as a reminder to squeeze those muscles. I’ve got a few kegel exercisers, all of which are the Fun Factory Teneo Duo (2 sets of elastomer, because I liked the different colors, and 1 set that’s silicone). I’ve never tried out another shape or size, though, and I’d been considering picking up a smaller set (the Teneos are on the large side). I wanted to get a set this time with some weight difference, so I decided to try out the SinFive Emigi Heavy and Extra Heavy Combo set from EdenFantasys. 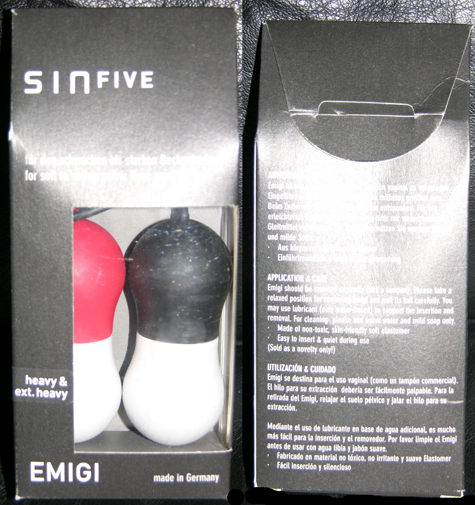 The Emigi Heavy and Extra Heavy Combo, which is made in Germany, comes in a small black cardboard box with the exercisers visible through the clear front window. Use instructions in different languages are on the sides and back, and the bottom of the box lets you know the weight of each. The black Emigi is the extra heavy weight, at 92g (3.2 oz), while the red Emigi is 72g (2.5 oz). 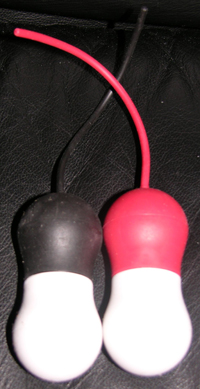 I thought that seemed light, but honestly I’d never weighed my Teneo Duo balls – turns out they’re 85g (3 oz). Looking at the single Emigi, it has a weight of about 96g (3.4 oz), so what it seems SinFive has done is taken their original exerciser, made it slightly less in weight, and then created 3 more exercisers that are lighter (the weights of the exercisers in the light/normal pack are 42g (1.5 oz) and 58g (2 oz). It’s a great idea if you find that traditional balls are too heavy, and it give you a variety to play with similar to other sets, like the Lelo Luna Beads or the Je Joue Ami set. If, though, you’re looking for a heavier set, these aren’t as heavy as you’d think.

The Emigi Heavy and Extra Heavy are the same size, at about 2 3/4″ long, with a max diameter of about 1 1/4”. They have a center narrows to 7/8”. The shape has been compared to a peanut – they remind me more of small barbells or funky cartoon mice. Each one is two-toned, with white on the top half and either red or black on the bottom part. The retrieval cord is about 3 3/4″ long, and its color matches the color on each exerciser. They’re compact in size for their weight, and seem heavier than they are – the Smartballs, by comparison, weigh in between the two Emigi, but feel a bit lighter to me than both. They’re not squishy at all; they’re quite firm. 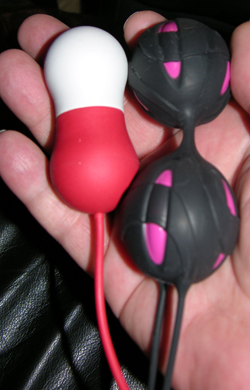 The red Emigi has smaller balls inside each end, and they move around a bit as the toy itself moves (either in your hand or when inserted). They’re not loud, and no one will hear them when they’re inserted inside. You may not even feel them – I don’t know if it’s due to the small size of the Emigi, but the ball movement doesn’t seem very pronounced.

The black Emigi doesn’t make any noise, nor does it have any sensation of balls moving inside – rather, it’s a solid, heavy object. You won’t be prompted to squeeze by any internal motion of the toy; your muscles may squeeze around it when you consciously do so, and you’ll notice the weight of the Emigi itself a bit from time to time as you go about your day. If you’re conscious of the toy, you’ll clench around it, and hopefully knowing it’s in there will remind you to squeeze your kegels.

With their compact and small shape, both Emigi are easy to insert. Since the surface is matte and has a bit of drag, simply add a bit of lube (water-based is recommended) and insert them as you would a tampon. The string will hang out for retrieval – if you find it’s too long, simply trim it down to a length of your liking. Removal is just as simple: pull gently on the string, bearing down with your muscles as needed, to slide the Emigi out. 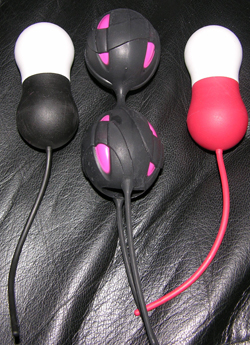 So, Do They Work? I have mixed feeling about these balls.  I like the size and shape a lot, and how the two halves aren’t connected by just a string. They’re easier to insert than the Teneo Duo, and they’re very comfortable to wear. Even though the weights are lighter than I expected, I like the weight. For myself, I wouldn’t go with balls that were any lighter, but the lighter set would be a good option if you like the design but find these too heavy for your taste. 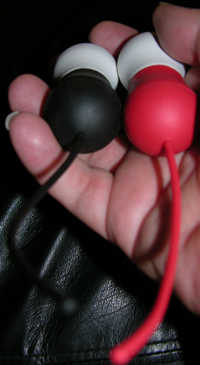 What I don’t like is that I can’t feel the balls moving in the red Emigi. The sensation is noticeable in my hand, but it’s basically non-existent when I have them inserted. I also don’t like that the black one doesn’t give the sensation at all. When I use my Smartballs, I can feel the motion the inner balls create and, aside from being pleasurable, the feeling causes me to actively clench when I’m wearing them. With the Emigi, I have to consciously think that I have them in and give a squeeze.  Maybe you aren’t supposed to feel the movement, but I figure if I’m going to use a ball-style kegel exerciser, I should feel the balls when I’m moving around, and these won’t be replacing my Smartballs.

Thank you to EdenFantasys for sending these to me to review! If you’re looking for something easier to insert and smaller than your current kegel balls, the Emigi combo will give you a choice of weights to train your muscles, although the sensations may not be as noticeable (or noticeable at all) as what you’re expecting. You can pick up the SinFive Emigi combo sets or other kegel exercisers at EdenFantasys.com by clicking on the widget below.

This entry was posted in EdenFantasys, Reviews. Bookmark the permalink.

2 responses to “He Ain’t Heavy…Nor’s His Brother”