I had never really considered warming/cooling clitoral gels until fairly recently, and I will say I’ve found them, for the most part, to be a lot of fun.  The cooling ones have been more successful for me, but I’d been hoping to find a warm one that wowed me. So when Babeland offered ON Arousal Gel for review, I was happy to give it a try.

ON Arousal Gel from Sensuva comes in a small, tasteful black box with pink, silver and white lettering.  The bottle is fairly small – about the size of a small eyedrop bottle, and it’s also black. The logo on the front of the bottle is large, but the silver lettering is small, and the bottle would blend in on the shelf with other bottles with ease. It holds 5ml (.17 oz).

Although this is called a gel, it’s actually an oil; there’s nothing gel like about it. It’s ingredients are a propriety essential oil blend, which includes sweet almond oil, cinnamomum cassia, natural tocopherols (vitamin e), silica, phenoxyethanol and ethylhexyglycerin, and rosemary oil extract.  It doesn’t contain L-Arginine, menthol, or citrus. The ethylhexyglycerin is a new chemical used in place of parabens, and it can irritate the skin or eyes. This won’t be coming near your eyes, but do make sure to wash your hands after applying it so you don’t get traces of it there on accident. ON shouldn’t be used, according to the box, if you have a vaginal infection of any kind, or if you’re pregnant or nursing, or trying to conceive.  Also, since it is oil based, it isn’t safe to use with latex condoms, although it’s compatible with polyurethane ones.

ON smells a bit like menthol with an undertone of cloves and a hint of cinnamon. It’s an interesting scent: not overwhelmingly pleasant, but not awful either.  It is edible, and has a light oily taste of cloves.  The directions say to apply 1 to 2 drops on the clit, and allow up to 2 minutes for the full effect. The effect can last for up to 45 minutes. While you could apply this to nipples, the penis, or other areas, its effects are most noticeable on the clit. The bottle contains 50 applications.

The oil comes out of the bottle a drop at a time, just like eye drops, and it runs almost immediately after it hits your finger. It’s thin, and a light yellow in color.  It’ easy to rub in and around your clit, and then once the ingredients kick in, your clit will become very, very warm.

It’s easy to wash off with soap and water if you find the effect too strong or want to remove any traces of the oil from your skin. 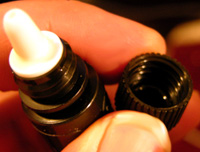 The next time I tried this, I tried it with my husband. When I had tasted it off my finger, it was distinctly oily and like cloves, but he didn’t notice it as much. He also didn’t mind the scent of it. Again, it seemed to arouse me, but didn’t hasten or strengthen any orgasms.

I did think the effect lasted longer the second time, and future times as well. I’m not sure if it had anything to do with the delay (applying it, and then waiting to let the effect really kick in – about 10 minutes or so), and overall it seemed to keep my clit hot for about 30 minutes.  I think I prefer the cooling “gels”, but ON is something I’ll alternate with them, as the sensation is pretty intense, and … I like it.

Thank you to Babeland for sending this to me for review! If you like strong warming clitoral gels, ON is one to try. You can pick it up at Babeland.com by clicking the widget below.

This entry was posted in Babeland, Reviews and tagged lube. Bookmark the permalink.

14 responses to “Get Turned ON”