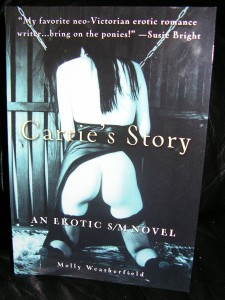 The book is told from Carrie’s point of view, and it opens with her being Jonathan’s slave.  She’s been his slave for about a year, and one day while she’s licking his balls he tells her that he wants to put her up for auction.  This revelation and what it means has Carrie thinking back on how she first met Jonathan and how their relationship evolved to its current point: the sessions with Jonathan, the training, the punishment, and Carrie’s willingness and need to please him, always with her eyes open.

Once Carrie has agreed to go auction and the training begins in earnest, she 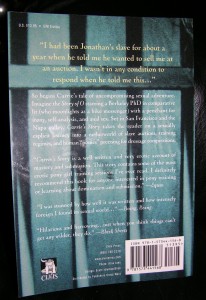 The story culminates in northern Europe, where Carrie goes before a board of examiners to see if she’s worthy of being auctioned.  She passes, and she’s separated from Jonathan for some final preparation before she goes up on the block for the highest bidder.

Carrie’s Story is easy to read, and the author does a good job of drawing you in to Carrie’s situation and the events happening to her.  Carrie’s character is well developed, and she’s an intelligent, introspective, and funny woman who accepts and, indeed, longs for what happens to her on her journey to be certifiably owned.  I think, in fact, it’s her intelligence more than any other characteristic, that allows her to transform into the slave she can be. This product was provided to me for free in exchange for an honest review for a retail website. This review has been modified with updated links, and is in compliance with the FTC guidelines.

44 responses to “More Real Than the Law is the Heart”